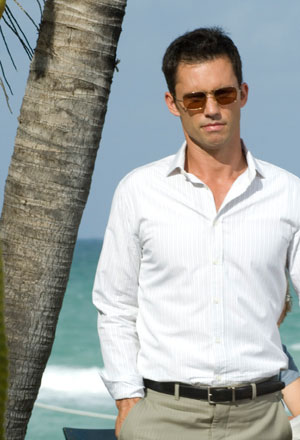 Do you remember old 90s movies with detectives trying to solve various crimes – and of course always succeeded? Well, I sure do, and I pretty much missed TV shows like Miami Vice. With all the chicks (most of them blonds of course), hot cars, lots of guns and cheesy music, it was hard not to love it back then.

But, as time went on and people actually didn’t fall for the cheap special effects and low-budget stunts, we got much more interesting movies, and one of them brings back best of the Miami Vice and even adds a bit of MacGyver (and come on, who doesn’t like MacGyver?). And this new show is called Burn notice (imdb).

It’s not too much of a catchy name, but everything else is just amazing about it. The actors (as for most TV shows nowadays) are good looking, know all sorts of nice moves and of course, always manage to get out of though situations.

But what I love most about this particular show are the main character’s (Michael) lines. Here are some of my favorite quotes from the first episode (yes, I know there are many, but this is just how good the show is) 😉

Know what it’s like being a spy?
Like sitting in your dentist’s reception area 24 hours a day.
You read magazines, sip coffee, and every so often, someone tries to kill you.

When a spy gets fired, he doesn’t get a call from the lady in H.R. And a gold watch.

So you stay in the place where everyone is a jello shot away from alcohol poisoning.
If you see someone who can walk a straight line, that’s the fed.

Any uniform store will sell you a messenger outfit, and any messenger can get past a security desk.

Look at the bright side… They wanted you dead, you’d be dead.

Oh, this is Miami. Any incident, and the police blame the nearest cuban.

Drop me in the middle of the Gobi desert.
Bury me in a goddamn cave on the moon. And somehow, she’d find a way to call me and ask me for a favor.

Figuring out if a car is tailing you is mostly about driving like you’re an idiot. You speed up, slow down, signal one way, turn the other.
Of course, ideally, you’re doing this without your mother in the car.

You know, you missed your father’s funeral. By eight years.
Well, last time I talked to him, he said, “I’ll see you in hell, boy.” so I figured we had something on the books.

Actually, losing a tail isn’t about driving fast. A high-speed pursuitis just gonna land you on the 6:00 news.
So you just keep driving like an idiot until the other guy makes a mistake.
Again, all of this is easier without a passenger yelling at you for missing a decade’s worth of thanksgivings.

Whether you’re a coke dealer, a thief, an arms dealer, or a spy, you need someone to clean your money.
Which makes a good money launderer the closest thing you can get to a yellow pages for criminals.
Even better, a money launderer will always take your phone call, burn notice or no burn notice.

Nobody gets hurt?
Nobody you care about.

Cracking an old-school safe is pretty tough, but modern high-tech security makes it much easier.
Thing is, nobody wipes off a fingerprint scanner after they use it, so what’s left on the scanner 9 times out of 10 is a fingerprint.

Fighting for the little guy is for suckers. We all do it once in a while, but the trick is to get in and out quickly without getting involved.
That’s one trick I never really mastered.

A spy is just a criminal with a government paycheck.

Every decent punk has a bulletproof door. But people forget walls are just plaster.

Hopefully, you get him with the first shot.
Or the second.

I mean, in the ’80s, the rules were the rules.
They had their guys, we had our guys…
Wasn’t so goddamn complicated.
You could get your head around it.
Now, today, it’s all about religion and oil.
It’s no fun anymore.

30 years of karate… Combat experience on five continents… A rating with every weapon that shoots a bullet or holds an edge… Still haven’t found any defense against mom crying into my shirt.

Ford outside has g-series plates. Fast-draw holsters, off-the-rack suits, and cheap loafers. No, you guys are feds.

Most bad guys expect you to just sit there and wait for them like those are the rules or something.

By the way, you’re gonna have a hard time blowing my brains out with the safety on. Whoa, hey, the safety was off! What do you know… My mistake.

You shot your buddy here, mr. Pyne. And this… This… This here is a crime lab’s wet dream.

As a spy, it doesn’t matter if you’re helping rebel forces fight off a dictator or giving combat tips to a third-grader. There’s nothing like helping the little guy kick some bully’s ass.